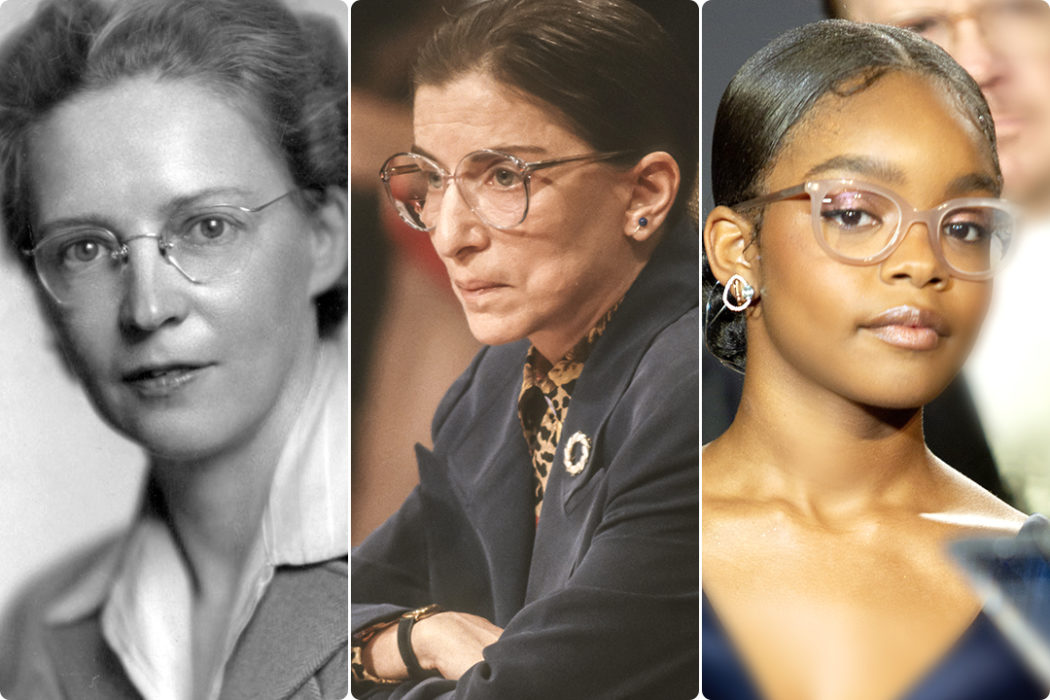 International Women’s Day is an important time for us to pause, reflect, and focus on what gender equality looks like within our daily interactions. This year’s theme is #ChooseToChallenge, which we took as an invitation to highlight incredible women who have challenged expectations and left an impact in their worlds.

From international icons to heroes within our own Womxn at Clearly community, these individuals share many characteristics: strength, determination, intelligence, and a penchant for wearing stylish glasses, of course.

And now we challenge you – read on, get inspired, and look for ways you can uplift and celebrate the achievements of the incredible people in your circle, on International Women’s Day and beyond.

Elsie MacGill was born in Vancouver, Canada (the same place as Clearly!) in 1905, and spent her life challenging expectations of what a classroom, a workplace, and an entire industry should look like.

Her mother, Helen Gregory MacGill, was British Columbia’s first female judge and an advocate for women’s suffrage, and Elsie carried this legacy forward. In 1927, she became the first Canadian woman to earn an electrical engineering degree, after graduating from the University of Toronto.

This was the first of many ‘firsts’ she would earn. During her lifetime, she became the first woman in the world to gain a master’s degree in aeronautical engineering, the first woman to serve as Technical Advisor for International Civil Aviation Organization, and the first woman ever to chair a UN committee (just to name a few).

MacGill was nicknamed Queen of the Hurricanes and featured in everything from international news stories to comic books for her role in developing the WWII Hawker Hurricane fighter aircraft. But, as well as incredible advancements in aeronautical technology, her legacy includes a lifelong dedication to advocating for women’s rights, for which she received the Order of Canada in 1971.

By spending a lifetime shattering glass ceilings, MacGill proved that, when women have ambition, self-belief, and a clear vision, the sky is the limit.

Justice Ruth Bader Ginsburg was a woman who chose to challenge – and conquer – all obstacles that crossed her path. This began with graduating joint-first in her class at Columbia Law School in 1959, all while raising her baby daughter and caring for her husband, who had testicular cancer at the time.

Despite facing relentless gender discrimination in her academic and professional pursuits, she became the first tenured woman to hold a position at Columbia Law School. After moving on to a fellowship at Stanford, she was appointed as a U.S. Court of Appeals judge.

In 1993, she became the second woman (and the first Jewish woman) to serve as an Associate Justice of the U.S. Supreme Court. Justice Ginsburg held this position until her death in December 2020.

From the classroom to the courtroom, she pursued equal treatment of men and women under the eyes of the law. Her legacy continues to protect the rights of Americans and inspire people across the world. By challenging the system, Justice Ginsburg’s story shows us the monumental change that can be achieved when women take their rightful spaces at the table.

Marsai Martin has challenged the Hollywood machine, broken a Guinness World Record, and become an inspiration for young women around the world – all before she was old enough to get her driver’s license.

At age 10, she landed her first acting role on the sitcom Black-ish and quickly became an audience favourite both on and off-screen. As her success on TV grew, Martin began looking for other acting opportunities but was frustrated by the lack of roles for young, black women – so she decided to take matters into her own hands and create her own content.

Her work off-screen is just as impactful – with a loyal following on social media, Martin uses her platform to talk about issues that are important to her, which includes everything from challenging traditional Hollywood beauty standards to raising awareness for movements such as Black Lives Matter.

By using her platform to tell stories that are relevant to her, Martin shows us that challenging the narrative can break boundaries and open up new possibilities for everyone.

As well as recognizing incredible women that have impacted our culture, International Women’s Day is about looking around at the amazing people who make a difference in our lives.

At Clearly, we take time throughout the year to discuss the impact of womxn in the workplace through our Womxn at Clearly activities. This includes celebrating our team members – here, we’ve shared just a handful of the inspiring nominations for women who #ChooseToChallenge every moment they show up to work:

“This person is always calm and down to earth. She clearly has a million things to do and yet she always makes an effort to respond to requests very quickly. She also takes the time to give positive feedback and say thank you. She is confident without being egotistical. But she’s certainly not a pushover either and is a great role model for all women in the workplace.”

“This woman always makes sure we feel heard and appreciated. She is incredibly thoughtful, understanding, organized and insists credit is given where it is due. Her positive attitude and willingness to help speak volumes to how much she cares. I look up to her not only as a colleague and a friend, but also for the way she parents, teaching equal opportunity to her child and demonstrating an even parenting split. A true triple threat!”

“I admire this woman because she will speak her mind even in an environment that isn’t always conducive or welcoming to do so. She teaches me to be more assertive for myself in the workplace and life in general. She will always be the first to lend a helping hand and will even skirt her insecurities to help someone else through theirs.”

From the US Supreme Court to the open skies. From the Hollywood hills to our (virtual) offices. Everywhere we look, we can find women who #ChooseToChallenge in ways that have changed the course of history and impacted our own day-to-day lives.

If you’ve been inspired by a woman in your life, or you have your own vision to share, we want to see it – tag us on Social and show us how you plan to #ChooseToChallenge on International Women’s Day and beyond.

You were here first: we’ve pulled together the latest eyewear trends for 2022. Check out this year’s trending glasses for men and women and find frames that will have everyone asking where…